Titre VO
The One With Phoebe's Husband 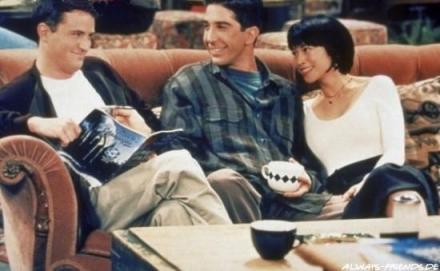 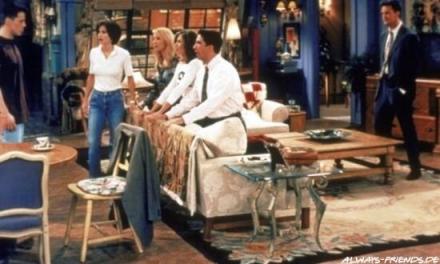 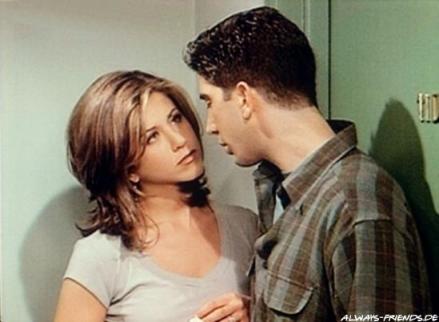 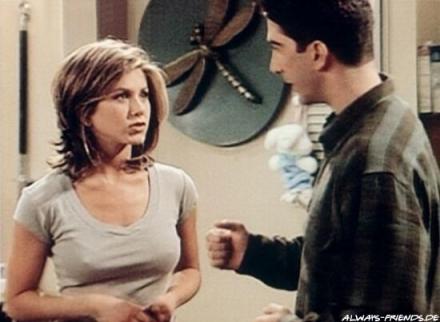 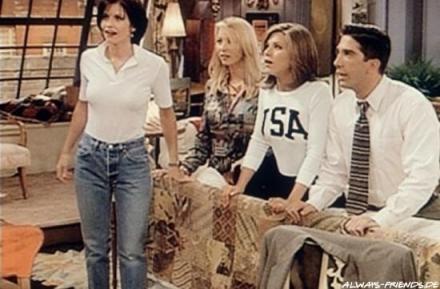 ROSS : A plus tard, chérie.

[Scene: Monica and Rachel's apartment. Rachel is on the phone.]

RACHEL : What? [in surprise she forgets she has the pigeon in the pot and lets it get away]

Stranger: Hey, how, how did you do that?

[Scene: Monica and Rachels apartment. The whole gang is there.]

JOEY : This is unbelievable Phoebs, how can you be married?

PHOEBE : Well, I mean, I'm not married married, ya know, he's just a friend and he's gay and he's just from Canada and he just needed a green card.

MONICA : I can't believe you married Duncan. I mean how could you not tell me? We lived together, we told each other everything.

PHOEBE : I'm sorry Monica but I knew if I told you, you'd get really, like, judgemental and you would not approve.

MONICA : Of course I wouldn't approve, I mean, you were totally in love with this guy who, hello, was gay. I mean, what the hell were you thinking?

ROSS : You see, and you thought she'd be judgemental.

PHOEBE : OK, I wasn't in love with him and I was just helping out a friend.

MONICA : Please, when he left town you stayed in your pajamas for a month and I saw you eat a cheeseburger.

MONICA : I can't believe you didn't tell me.

MONICA : What have I not told you?

PHOEBE : Oh, I don't know. Umm, how about the fact that the underwear out there on the telephone pole is yours from when you were having sex with Fun Bobby out on the terrace.

MONICA : Wait a minute, who told you? [turns to Chandler who's looking sheepish] You are dead meat.

CHANDLER : I didn't know it was a big secret.

MONICA : Oh it's not big, not at all, you know, kinda the same lines as, say, oh I don't know, having a third nipple.

PHOEBE : You have a third nipple?

RACHEL : Oh as, as opposed to your other multi-functional nipples?

JOEY : I can't believe you. You told me it was a nubbin.

ROSS : Joey, what did you think a nubbin was?

JOEY : I don't know, you see somethin', you hear a word, I thought that's what it was. Let me see it again.

CHANDLER : If I'm goin' down, I'm takin' everybody with me.

JOEY : Ahh, alright, alright, alright, I was young and I just wanted a job, OK. But at the last minute I couldn't go through with it so they let me be the guy who comes in to fix the copier but can't 'cause there's people havin' sex on it.

MONICA : That is wild.

PHOEBE : Yeah, is there a hair on it?

JOEY : What happens if you flick it?

[Scene: Central Perk. Chandler, Ross, and Julie are sitting on the couch.]

ROSS : So, uh, does it do anything, you know, special?

CHANDLER : Why yes Ross, pressing my third nipple opens the delivery entrance to the magical land of Narnia.

JULIE : You know, in some cultures having a third nipple is actually a sign of virility. You get the best huts and women dance naked around you.

CHANDLER : Huh? Are, uh, any of these cultures, per chance, in the tri-state area?

ROSS : You know, you are so amazing, is there anything you, you don't know?

MONICA : Look honey, I wanted you to hook up with Ross as much as you did. But he's with her now and you're just gonna have to get over it.

JULIE : Where you goin'?

CHANDLER : No, no the gravel capades. Yeah, the turns aren't as fast but when Snoopy falls. . . funny.

MONICA : I can't believe you're dressing up for him. I mean, you're just, you're setting yourself up all over again.

PHOEBE : OK, no. For your information I'm going to see him so I can put all those feeling behind me. OK, and the reason I'm dressed like this is because I think it's nice to look nice for your gay husband.

ROSS : [holding cream pitcher] Oh, darnit, we're all out of milk. [holds pitcher in front of Chandler's chest and flips the lid] Hey Chandler, would you fill me up here?

[Scene: Central Perk close to closing. Ross and Julie are still there. Rachel is cleaning tables.]

[Rachel is still cleaning, Ross is laying on the couch. Ross kicks Rachel in the butt.]

ROSS : Can I ask you somethin'?

ROSS : OK, what's the longest you've been in the relationship before ha, have, having the sex?

RACHEL : No, no no no, don't need to know the details.

ROSS : It's just, it's, it's me. You, you know I've only been with one woman my whole life and she turned out to be a lesbian. So now I've got myself all psyched out, you know, and it's become, like this, this thing and I. . . Well, you just must think I'm weird.

RACHEL : I think it's sexy.

RACHEL : Let me tell you something. As a woman there is nothing sexier than a man who does not want to have sex.

RACHEL : Oh yeah. In fact you know what I'd do?

RACHEL : Yes, absolutely. I would wait and wait. . . then I'd wait some more.

RACHEL : More than jewelry. [Rachel struts off, extremely pleased with herself]

DUNCAN : Ahh, look at you, you look great.

PHOEBE : Sparkly. So, wow, this is pretty wonerful, huh. Mr. major capades guy. I, I remember when you were just, like, King Friday in Mr. Roger's Ice is Nice.

DUNCAN : You always said I'd make it.

DUNCAN : I missed you. [they hug] I'm gonna get changed.

[Scene: Ross's apartment. Ross and Julie are setting the table.]

ROSS : Julie, can you hold this for a second, thanks. [hands her a bowl and kisses her]

CHANDLER : Sorry, you had a paleontologist on your face. But, uh, it's gone now, you're alright.

ROSS : [pulls Rachel aside] I just, I wanted to thank you for our uh, our little talk before.

RACHEL : Oh, God, no problem. So you're gonna go with the uh, waiting thing?

RACHEL : What did, what did he say?

JOEY : I'm fine with it, I mean, if you're OK watching a video filled with two nippled people. [Chandler puts the tape in]

RACHEL : Great, people having sex, that's just what I need to see.

RACHEL : Well, well um, you know, these movies are offensive and uh, degrading to women and females. And uh, and the lighting's always unflattering. And, Monica help me out here.

JULIE : So is there like a story or do they just stard doing it right. . . oh, never mind.

CHANDLER : OK, now wait a minute. That is the craziest typing test I've ever seen.

MONICA : All I say is, she better get the job.

ROSS : Looks to me like he's the one getting the job.

PHOEBE : So um, so what's up, you came to see me yesterday.

DUNCAN : Oh God, I don't know how to tell you this. I'm straight.

PHOEBE : I, I don't, I don't understand, how can you be straight? I mean, you're, you're so smart and funny and you throw such great Academy Award parties.

DUNCAN : I know, that's what I kept telling myself but you just reach a point where you can't live a lie anymore.

PHOEBE : So how long have you known?

DUNCAN : Well I guess on some level I always knew I was straight. I though I was supposed to be something else, you know, I'm an ice dancer, all my friends are gay, I was just tryin' to fit in.

PHOEBE : And um, and there's actually a, a woman?

PHOEBE : Oh. Well is she, is she the first that you've been with?

DUNCAN : Well, I've never told you this but, there were one or two times, back in college, when I'd get really drunk, go to a straight bar and wake up with a woman next to me. But I, I, I told myself it was the liquor and e-everyone experiments in college.

DUNCAN : But now I know I don't have a choice about this, I was born this way.

PHOEBE : I, I don't know what to say. I mean, you know, you're married to someone for six years and you think you know him and then one day says, 'Oh, I'm not gay.'

PHOEBE : Why couldn't you have just figured this out six years ago?

[Scene: Ross's apartment. Everyone is sitting around. Monica enters from bathroom.]

MONICA : You know, it still smells like monkey in there.

JULIE : That saves us a conversation.

CHANDLER : Well, listen, this has been great but I'm officially wiped.

RACHEL : No, no, I mean, no, c'mon you guys, I mean, c'mon look it's only eleven thirty. Let's just talk, we never just hang out and talk anymore.

MONICA : Rachel, that's all we do.

RACHEL : Maybe that's all we do, what about Julie?

JULIE : What about Julie?

RACHEL : Well, you have been in our lives for nearly two months now and we don't really know you. I mean, who is Julie? I mean, what do you like, what don't you like? We wanna hear everything.

JULIE : Well, that could take a while.

RACHEL : So. I mean, who here does not have the time to get to know Julie?

CHANDLER : I got the time to get to know Julie.

MONICA : Rach, I know her pretty well, can I go? [Rachel gives her a look from hell] That's fine.

RACHEL : OK Julie, so now let's start with your childhood, what was that like?

PHOEBE : So, um, have you told your parents?

PHOEBE : [handing him the papers] Here you go. You know what, I just have one more question, um, if you had figured this out sooner and um, I had been around, do you think that I would have been the one who. . . no, um, I'm sorry, don't tell me, I don't th ink either answer would make me feel better.

DUNCAN : I love you Phoebe. [they hug and kiss]

JULIE : No Cobb, as in cobb salad.

RACHEL : Now, what exactly is in a cobb salad?

RACHEL : What?
[Outside in the hallway, Chandler, Joey, and Monica exit]

RACHEL : So, it's pretty late, you're probably uh, not still planning on. . .

RACHEL : Oh, well, are hey, are you nervous?

RACHEL : Uh, OK, I mean uh, what, how are you gonna handle it. I mean, are, are ya gonna, are ya gonna talk about it before hand, are you just gonna pounce?

RACHEL : Nothing, I mean, um, it is your first time with her and, you know if the first time doesn't go well, well then that's, that's pretty darn hard to recover from.

RACHEL : Maybe you should put it off.

RACHEL : Maybe it, maybe it doesn't have to be this tough. I mean, maybe you were on the right track with this whole, you know, spontaneous thing. I mean, women really like that.

RACHEL : Yeah, I mean, you know it, I mean, if it were me I, I, you know, I'd want you to, I don't know, like catch me off guard, you know, with like a really good kiss, you know really, sort of um, soft at first, then maybe um brush the hair away from my face, and look far into my eyes in a way that let's me know that something amazing is about to happen.

RACHEL : And then, I don't know, I mean you'd pull me really close to you so that, so that I'd be pressed up, you know, right against you. And, um, it would get kind of sweaty and uh, and blurry, and then it's just happening.

ROSS : Ohh. . . Thanks Rach, goodnight. [goes back in apartment]